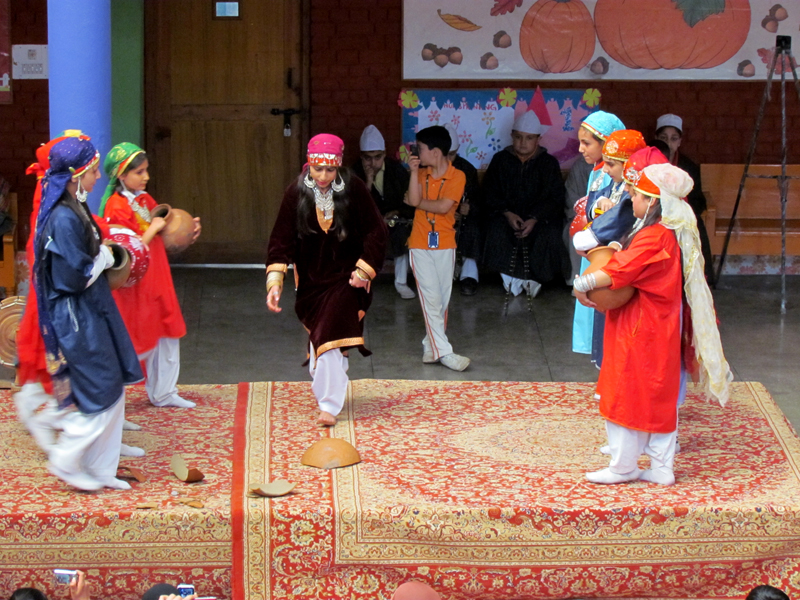 A child holding a book for pleasure is becoming a distant dream, world over. Srinagar then is not an exception. Bookaroo – The Book Festival, has been trying hard to inculcate reading habits in children. Speakers from across the country spread the joy of reading through their talks, readings, performances, music, craft. Bookaroo is much more than just story telling – although we had plenty of that!

The festival once again aimed at promoting children’s literature locally, regionally and globally and encourage cultural exchange and dialogue, education and development with similar organisations. Its objective being to build up a multi-lingual festival featuring national and international authors in democratic settings with a firm first come first seated policy.

The festival included workshops on everything from mathematics to cartoons, from building alien worlds to recycling paper; as well as story sessions under the banyan tree, puppet shows, and a doodle wall to let their favourite authors, and well-loved children’s characters – from Horrid Henry to Elmer the Elephant, from characters from the Panchatantra to Ramayana, from Taranauts to I Heroes, from Mukand to Felicia.

The authors who participated were all exceptionally creative reflecting varied interests. Andrew Hoffland, Deepak Dalal well known for adventure stories, Feisal Alkazi, Ghulam Nabi Aatish winner of the Sahitya Academy award, Cultural Academy award and Soviet Land Nehru award, an author of Kashmiri children’s books. John Dougherty an Irish poet, singer and songwriter, Jose Louies a naturalist and wildlife expert, Parnab Mukherjee who kept the audience spell bound by his presentation of Habba Khatoon’s works through modern symbolism. Wendy Cooling, Paro Anand an award-winning author of children’s books for all ages and a storyteller par excellence. Adittya Nath Mubayi has been quizzing since he was seven and is not looking to give it up, ever. Mudita Mubayi, Robert Sabuda the creator of intricate and magical pop-up books for children. Sandhya Gandhi Vakil storyteller and translator who also works with paper. Suvidha Mistry, Vandana the winner of the Noma award from Japan and the Katha award.

There was also a special display of children’s books by Eureka, the festival bookstore where one could buy and browse and have one’s books signed by their favourite authors and poets.

The wonderful event gave the children chance to see, touch and fall in love with the best of childrens’ books. The enthusiastic children lined up, and waited their turn and were seen browsing books and jotting down titles of their choice.