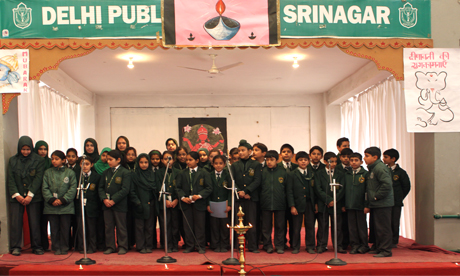 The Special Diwali Assembly was held by the Middle wing of DPS, Srinagar on Nov. 12, 2012, which was hosted by the students of Class IV. The Assembly was initiated by lighting of Deep by Ms Yusra, the Incharge of the Middle Wing.

The young Anchors of the Assembly were Ahmad and Mirrali of Class IV. The programme started with the Bhajan by a group of students of 4th Standard. After the Ram Bhajan, the light was shed on Dipawali by Kushi of Class IV. A Hindi poem related to Diwali, the Festival of Lights, was recited by Fatima. The melodious Diwali Song was followed by the foot-tapping Dance performance by a group of Students of Class IV.

The Assembly was concluded by the Address of Mr. Vijay Dhar and his interaction with the students about the festival of lights. Mr. Dhar wished all the students and the staff “Happy Diwali”.