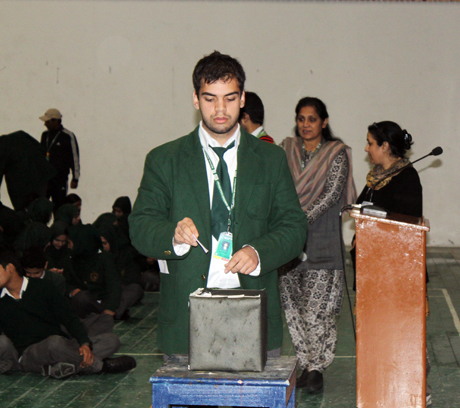 We are part of a democratic country and each one has a right to vote. This thought was brought into practice at DPS, Srinagar on 16th of April 2013 when elections for the position of Head Boy and Head Girl were held. Elections have always been an event that students look forward to. A long process including debate, manifesto, colourful ballot boxes, counting and the declaration of results. The whole process of election was successfully completed in a day and the excitement was seen to be believed. Iftikhar Asgar Samoon (Grade XII) was elected as the Head Boy and Hazika Bhatt (Grade XII) was elected as the Head Girl. Ahmed Basit (Grade XI) and Asra Majeed (Grade XI) were elected as the Vice Head Boy and the Vice Head Girl.