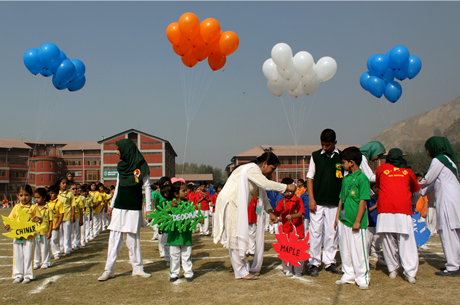 The junior wing (Classes LKG-II) SPORTS MEET 2013 held on 5th October 2013 was a day filled with fun games and displays thoroughly  enjoyed by the students, parents and guests alike. The SPORTS MEET kick-started with a beautiful song – ‘I have a dream  –The DPS vision’ which gave the message to each child-be what you want to be. Children of LKG & UKG  dressed in costumes ranging  from pilot, teacher, master chief, doctor and were a sight to behold. This was followed by ‘PAL-From Darkness to Light’ a beautiful dance drama which depicted that dreams can only be realised when there is peace.

The oath ceremony was a solemn affair and the meet was declared open by Mr. Vijay & Kiran Dhar by the hoisting of the Sports Flag  and release of house balloons. Tug of war, 80 mtr race, bursting the balloons, 3 legged race were some of the races in which students participated.

Dum-bells, Yoga, Taekwondo and Mass Drill were performed in perfect co-ordination. The youngest students of the school gave their best and showed how DPS  is a school with a difference which aims to nurture both scholastic and co-scholastic dream in each child.