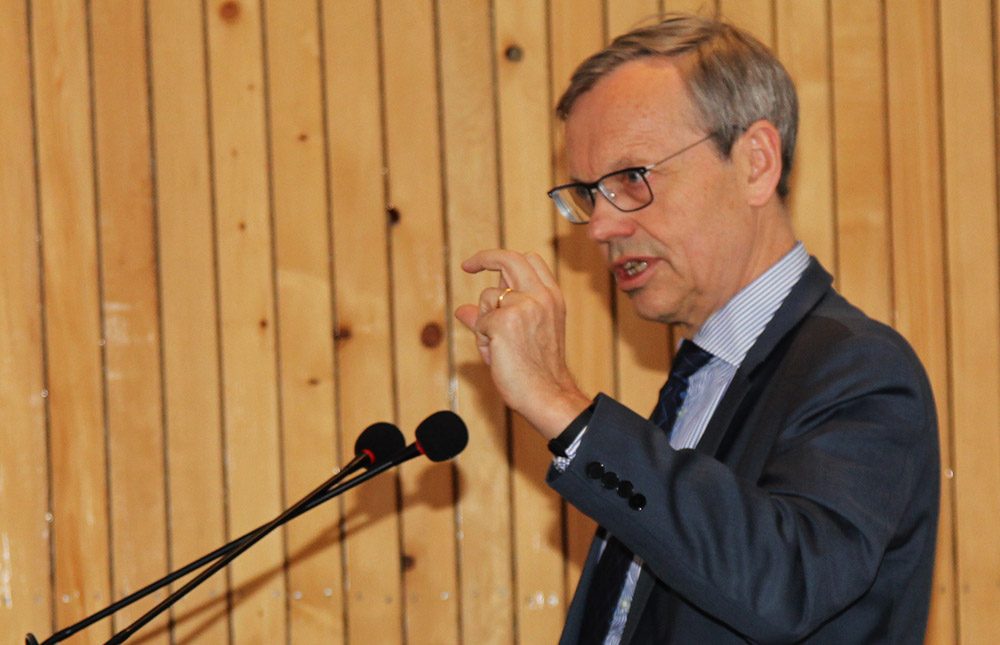 His Excellency, Nils Ragnar Kamsvag, the Ambassador of Norway, visited our school on May 8, 2017. The esteemed guest along with his delegates was welcomed by the student council and the Chairman, Mr. Vijay Dhar; Principal, Ms. Kusam Warikoo and Madam Kiran Dhar along with a group of teachers. The guests took a brief round around the school and visited the library, computer lab, tiny tots wing and the SEN department where he appreciated the efforts put in by the school for the special needs children. This was followed by an interaction in the office of the Chairman between the ambassador and some students and teachers of the school. A girl student proudly narrated her stories of success in the field of sports such as Taekwondo in which she has been a national and international champion. Another girl introduced the guests to a sport called Snow Rugby. His Excellency was glad to know about this new sport which he said his country, Norway, was unaware about, despite being good in winter sports. The student proudly explained how Snow Rugby is played in Gulmarg in Kashmir and how girls participate in it. The achievements of the students greatly impressed His Excellency who appreciated the participation of girl students in international sports.

The Chairman and the Principal also shared their precious views about the various aspects of student success. Apart from that, the dignitaries also showed keen interest in knowing about the selfless efforts and dedication shown by our staff members and the school authorities in successfully carrying out the academic session in the year 2016. The Principal briefed them about how the academics was managed in the adverse situation of the valley and how the whole school came together to save the academic session of the students. He was also presented with a booklet called “Harf”, specially designed by the school as a documentation of the struggle of the school through turmoil. His Excellency also enlightened all present about the various sports that are played in Norway.

Then the dignitaries had another interaction with a large group of senior students in the auditorium. A student presented a wonderful welcome speech for His Excellency, cordially addressing him as the Ambassador of the happiest country in the world which delighted the dignitaries. This was followed by a providing a detailed account of how our school successfully conducts student and teacher exchange programmes in collaboration with AFS.

His Excellency, on request of the students enriched the crowd with his enlightening and inspiring words. He expressed his delight to be with us in that moment. He illuminated all present there with words of wisdom by saying, “The actual wealth of a nation lies in the quality of its people and the quality of its institutions. It is the trust on its people that builds a nation.” His speech was followed by a question-answer session between the students and His Excellency who patiently and eloquently answered all queries. He also shared knowledge about how Kashmir can improve like Norway in spheres of economy and growth. He mentioned how Norway takes keen interest in assisting places affected by conflict.

The session was concluded with a vote of thanks offered to His Excellency for sharing a part of his much valued and precious time with us. The privilege that the school felt by hosting His Excellency for that afternoon was expressed in the concluding speech along with the hope that this visit would only be a beginning of a series of many more such interactive sessions and the start of a productive relationship between Norway and Kashmir.